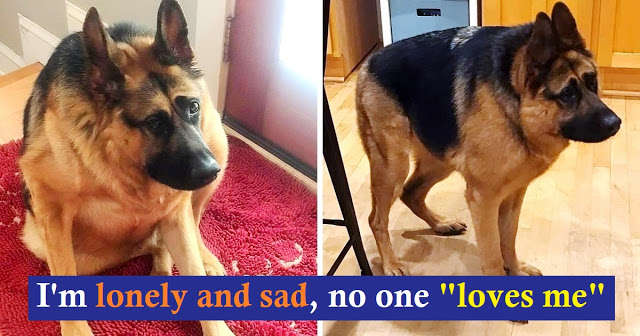 His owner thought he was a “freak of nature” and threw him out like yesterday’s trash. But the only thing the dog wants to do was spread his love.

When Rachel Mairose of Secondhand Hounds located a German Shepherd “hunchback” on the streets of Kentucky, she realized that a doggie had once struggled with a bone malformation known as “short spine syndrome”.

The canine additionally had a tight collar embedded round his neck which indicated that he used to be deserted through his proprietor a lengthy time ago.

Rachel saved the canine and aptly named it Quasimodo (or Quasi). At the vet it was once determined that the dog had approximately four years of history and was one of the 15 unusual puppies in the world who lived with this initial defect!

Quasi’s shortened physique was once attributed to his pushing his spine. Rachel additionally discovered that his full-grown head would by no means have any help due to a truly lacking neck. While puppies like Quasi normally quit up getting euthanized, Rachel seen that the pooch skilled no ache due to the fact of his condition.

Aside from some feeding adjustments, Quasi did not require uniform care at all. So Rachel was not only delivered to him as a foster parent, but she was even more thrilled when she saw him hanging out nicely with her kids and different dogs!

A few times ago, Quasi grew into a permanent part of Rachel’s family! Today, this is a different dog in an amazing boy who loves to frolic and chase things.

Watch the video below!