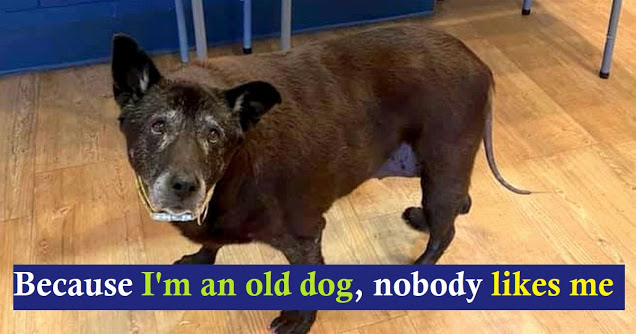 A man left his old dog tied to a public bathroom with a note saying, “Be kind to the dog.”

A nine-year-old black Labrador named Ladybird was found tethered to a public bathroom in Destrehan Splash Park in Louisiana.

She had food and water with her, and a note attached to her that said, “Be nice 2 dog – got stuck no car – be back soon – give my dog some water – be back in morning.”

Since the contents of the note were rather incoherent, local animal control assumed that the Ladybug had been abandoned and obediently transferred her to a lifeguard called St. John Parish Animal Shelter. Charles.

But the very next morning, they called from the real owner of the dog- who had indeed bicycled his thanks to the park to retrieve Ladybird!

The animal control guided the person to the rescue, and therefore the workers finally learned about his heartbreaking ordeal.

In a heart-to-heart conversation, he explained that he saved Ladybird when she was 6 weeks old. The duo have spent the last 9 years as adventurers traveling around the country.

But recently, he received adversity and things started going south.

The owner was currently homeless and carless, which is why Ladybird was left in a public bathroom to seek help.

He planned to maneuver to North Carolina along with his dog, where he had a family that could help him get back on his feet.

However, he was still stuck in Louisiana because he had no means of transportation.

The workers could see that this person was genuinely worried about Ladybird and that he did not want her to suffer in her old age.

After much deliberation, they decided to help him take Ladybird to his family home in North Carolina.

The best part was that several other rescues – namely “Turning Rescues into Pets”, “GreaterGood”, and “Wings Of Rescue”, also volunteered to help!

Watch this video till the top to ascertain how the mammoth efforts of those amazing rescues enabled Ladybird’s happy ending.
These rescues helped Ladybird and her dad within the most compassionate and non-judgmental manner – and that’s just beautiful!